Symbol declarations occur in modules and are delimited by the symbol

. The most important symbols are constants and theory inclusions (which are special cases of structures).

Constants are symbols that have a name and several optional components, namely

Examples for constants include mathematical constants, functions, axioms, theorems and inference rules. Their concrete syntax is

The order of the object-level components is arbitrary. They are seperated by the object-delimiter

, the constant declaration itself is delimited by

. Aliases are simply alternative names that can be used to refer to the constant and are useful e.g. in structures (see below).

A notation is an arbitrary sequence of tokens, optionally followed by prec <precedence>.

Example: The notation for an infix operation + could be given by # 1 + 2 prec 10. If a notation for a multiplication has a higher precedence (and thus a higher binding strength), e.g. # 1 ⋅ 2 prec 15, we can omit parentheses according to standard mathematical convention, so the expression a + b ⋅ c would be correctly parsed as a + (b ⋅ c).

Argument positions not given in a notation are assumed to be implicit, i.e. they have to be inferrable during type checking. This can be the case, if dependent type constructors are in scope, e.g. dependent products.

Example: A constant c with type

The %I<integer> token can be used to explicitly mark arguments as implicit. This may be necessary to disambiguate a notation whose last argument is to be left implicit.

Example: In natural deduction, the false elimination rule can be formalized as ⊦ false ⟶ {A:prop}⊦ A with notation # falsE 1 %I2. The second argument of type prop can be inferred by the type checker and therefore be left implicit. However, the notation falsE 1 would be ambiguous due to currying as to whether the return type is {A:prop}⊦ A or ⊦ A. As such the function could be called with one or two explicit arguments. %I2 enforces the presence of an implicit argument of type prop in the context thereby disambiguating the notation and excluding the usage with two explicit arguments.

Roles serve as metadata-like annotations to constants. In most situations they are simply ignored. The following list of roles have some special meaning:

Similar to how you can add meta data to modules, you can also annotate every declaration with arbitrarily many metadatums:

Note that you can have multiple metadatums on the same theory with the same key. In the implementation the metadatums form a list, hence this is allowed.

Both make the contents of some theory <domain> available to the current one. Structures may additionally modify the imported theory, most importantly by instantiating constants with concrete values in the importing theory.

The syntax for a theory inclusion is

The include-relation between theories generates a partial order. In particular, includes are composed transitively, and including the same theory twice is redundant.

The syntax for structures is

Implementation note: Because includes and structures are often treated exactly the same way, the MMT system represents an include as a structure with empty body and the induced name [<domain>]. API-wise this corresponds to having an MPath referencing a module (e.g. a theory) and then taking a ComplexStep to refer to the inclusion: MPath ? ComplexStep(MPath).

Let us assume, we have a theory Monoid with a constant G for the domain of a monoid, op for the monoid operation, unit for the unit of the monoid and the usual axioms. The latter might be included in (and extended by) a theory AbelianGroup adding the additional axioms. then we can use structures to form a theory Ring, using the theory Monoid for multiplication and AbelianGroup for addition. If we use includes, like this

the (transitively twice) included instances of Monoid will be identified, defeating the purpose. As mentioned above, named structures prevent that, and allow us to additionally

Thus, the correct theory Ring could look like this: 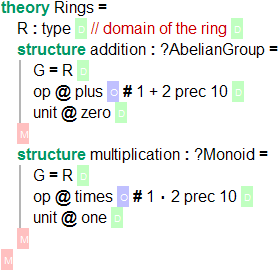 All the monoid/group axioms are imported via the structures and are thus available for the respective new symbols. If Monoid and AbelianGroup have the same meta theory (e.g. first_order_logic), then all symbols imported via that (e.g. quantifiers, logical connectives etc.) are identified across the two structures.

Rules are special Scala objects that can be declared in an MMT theory Thy to change the semantics of Thy-terms. For example,

are provided as rules.

Users typically do not need to use rules except when designing their own type systems outside logical frameworks.

To declare a rule, just write rule PATH inside Thy, where PATH is the MMT URI of a Scala object on the current class path - MMT will dynamically load the Scala object and use it in all Thy-algorithms.