Diagram operators are meta-programming facilities which accept diagrams of formalization as input and output new diagrams. As such, they help making large archives of formalization less redundant and more concise.

As of December 2020, MMT has preliminary support for diagram operators following an accepted paper on Structure-Preserving Diagram Operators.

Operators in MMT are Scala classes that can be bound to MMT symbols and hence accessed from MMT surface syntax.

Similar automatic derivations are possible for the theories of substructures and congruences of magmas, semigroups, and so on. The following diagram pictures all theories and views that can be generated from a single SFOL theory X by means of the diagram operators implemented so far (2020-12-16): 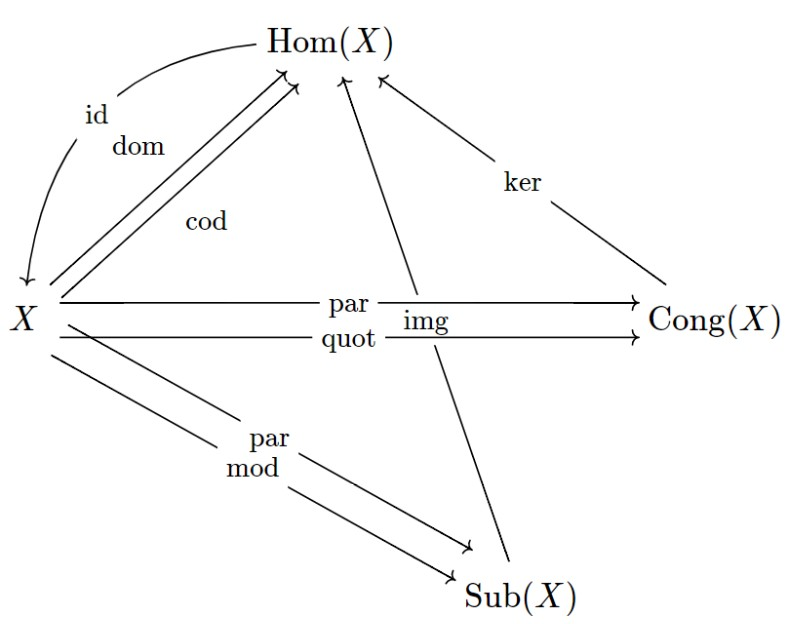 Imagine MMT theories Nat and Strings for natural numbers and strings. Do they share redundant parts? In some sense, they do since natural numbers form a monoid (wrt. multiplication) and strings do, too (wrt. concatenation). Suppose we realized that both theories share a redundant part by having found a partial view Nat -> Strings. With that, we can reorganize the original theories by means of performing a theory intersection (see paper, MSc. thesis).

The ability to compute theory intersections is exposed as diagram operators, too.